With the 43rd pick of the 2012 Music City Miracles Mock Draft, the Seattle Seahawks (represented by luvyatits) select: 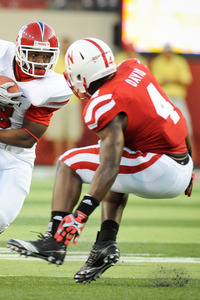 In the 1st round, the Seahawks took a player that I hoped would fall to the Titans (Fletcher Cox). In the 2nd round, they'll do it again and fill a big need by drafting Lavonte David, LB from Nebraska. They also need help at WR, but there's definitely not one available here with as much value as David. I hope I'm wrong and both of these guys end up in Tennessee...but in this mock universe I have them wearing the most ridiculous World-League-looking uniforms in the NFL for the Seattle Seahawks.

Now on the clock: criollo_pcg and the Kansas City Chiefs