With the 42nd pick of the 2012 Music City Miracles Mock Draft, the Miami Dolphins (represented by LockerTime) select: 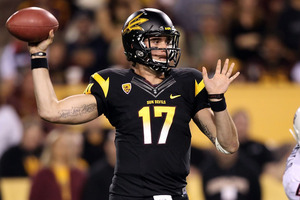 The Dolphins miss out on Tannihill, but finally get their quarterback of future. Matt Moore and David Garred can hold down the fort while Osweiler can learns the NFL game. With some scouts believing that this pro day has given him first round concideration the Dolphins can not wait any longer for a QB.

The is was CBCsports has to say about him:

The lanky Arizona State quarterback had shown talent and grit in his first two seasons with the program but few expected him to emerge as one of the top quarterbacks in the country in 2011. Osweiler, however, showed an immediate comfort level with ASU's new spread offense re-writing the ASU record book by completing 63.2% of his passes for 4,036 yards and 26 touchdowns (against 13 interceptions). His play helped lead Arizona State to a berth against Boise State in the Las Vegas Bowl, ASU's first bowl appearance since 2007. Though the Sun Devils lost, Osweiler completed 30 of 47 pass attempts for 395 yards and two touchdowns with an interception.

Has only 15 career starts and played in just 25 games, overall. Took the vast majority of snaps out of the shotgun in 2011 and will need to make the adjustment to dropping back from center -- not a unsubstantial requirement considering Osweiler's height. Courageous in the pocket. Willing to take the hit to complete the pass. Has been known as a hard worker throughout his career. Graduated high school early to join the team for spring practices in May of 2009 … Earned the team's Hard Hat Award for his work in the off-season conditioning program in 2010 … Named a team captain in 2011 … Cited the loss of offensive coordinator Noel Mazzone (whom Osweiler credited with his development) as a primary reason why he elected to leave school after his junior season. Mazzone was among those fired along with head coach Dennis Erickson following the 2011 season … May be just scratching the surface of his potential …

Now on the clock: luvyatits and the Seattle Seahawks