With the twelfth pick of the 2012 Music City Miracles Mock Draft, the Seattle Seahawks (represented by luvyatits) select: 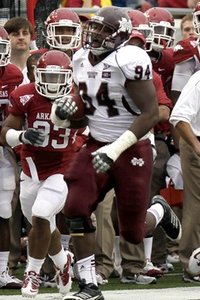 Many people see Cox (6' 4", 300 pounds) as a 4-3 tackle or a 3-4 end, but he'll replace Red Bryant in Seattle's 4-3 defense as a big, run-stuffing end. He also has the athletic ability and motor to get after the QB from the end position (which Bryant didn't have) or from the tackle position in obvious passing situations. Pete Carroll celebrated by doing the watusi with Marshawn Lynch when the Panthers passed on Cox, because it pretty much insured that either Cox or Quinton Coples would be available at pick 12. Not only does he fill a big need for Seattle, but Fletcher Cox is also the best player available in the eyes of this GM.

Now on the clock: MikeGriffFan27 and the Arizona Cardinals