With the eleventh pick of the 2012 Music City Miracles Mock Draft, the Kansas City Chiefs (represented by criollo_pcg) select: 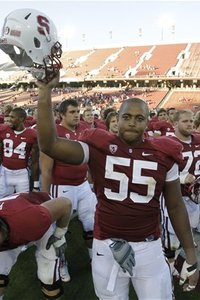 The Chiefs are a young team, loaded with good players. If not for injuries to their starting RB and QB, they could´ve made a push for a division title.
The premise here is that they need to protect their QB - whoever that may be.
I do think the Chiefs have a good chance of signing Manning if he becomes available. But even if they stick with Cassel, they need a reliable tackle to help their line.
Martin is a prototype OT, with good size, quickness and experience. Having played three seasons with Luck at Stanford, Martin is used to a pro-style offense.
I took a long look at big DT/NT, because this position is also a major need for the Chiefs. Their new coach Romeo Crennel and GM Pioli are known for making defense a priority with 1st round picks. But I´m banking on them changing that strategy and picking this great athlete. Martin´s specialty is pass protection, and that´s what he will be asked to do from day one. We talk a lot about the Titans signing a center, so that Amano can move to guard. Well, the Chiefs can do the same, picking Martin and moving Branden Albert to his natural position, LG.

Now on the clock: luvyatits and the Seattle Seahawks