Share All sharing options for: 2012 MCM Mock Draft: At #9, The Carolina Panthers Select....

With the ninth pick of the 2012 Music City Miracles Mock Draft, the Carolina Panthers (represented by Ice0ne (CAJ)) select: 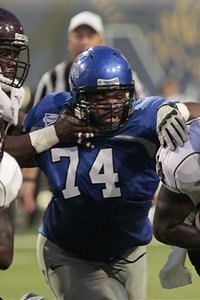 Their pass and rush defense were both at least 24th or worse in the league.
And seeing how our porous run blocking O-line helped CJ have a big day vs the panthers means they have room for improvement!
Dontari Poe had a great showing at the combine, not just for his size but for a D-lineman all around.
Putting him in the middle of that D-Line should help plug the middle up, because as we've seen from our o-line the first key to stopping the run game is plugging the middle.

I could've taken another DT, but i think that he will fit the Panthers well.

Now on the clock: alijeal and the Buffalo Bills