With the fifth pick of the 2012 Music City Miracles Mock Draft, the Tampa Bay Buccaneers(represented by Large Tuna) select: 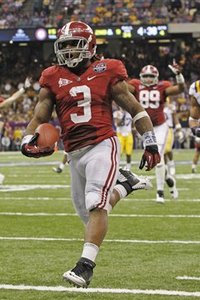 Morris Claiborne is the pick that most people are going with here, but the Buccaneers are not going to be able to pass on Trent Richardson. Running backs are undervalued in today's NFL, but teams don't want to pass on a sure thing. That is exactly what Richardson is. He can run past people. He can run over people. He can catch the ball out of the backfield. He can pick up a blitz. There really aren't any holes in his game.

They do have Gramsey's boy LeGarrette Blount, but he is not an impact player. Richardson is.

Now on the clock: JWhyte and the Washington Redskins