With the 33rd pick of the 2012 Music City Miracles Mock Draft, the St Louis Rams (represented by StPrattrick) select: 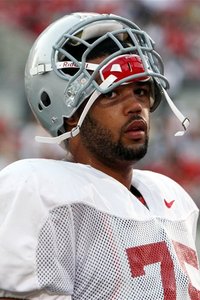 From one of the Saint's usernames:

6'8" - 320 pound giant man-monster. I hear he actually eats people for breakfast.... whole humans, for breakfast.
Breaking News: The Rams are not very good at pass-blocking. At all.
Starting left tackle Rodger Saffold, has been pretty disappointing and plagued by injuries this past season. Starting right tackle Jason Smith is just not very good in general. As for health, he has had at least two serious concussions in his young career. Some are wondering if his long-term future will include the Rams or the NFL.
That being said, it's time for an UPGRAAAAADE!

Enter Mike Adams. Human Eater.
A tall, long armed, athletically built offensive tackle. Displays good initial quickness off the snap in the pass game. Shows natural fluidity in the hips and good short area quickness toward the edge and when asked to mirror. Possesses the short area quickness/coordination to reach blocks on the edge and is comfortable in space.Downside though, will miss the first five games of the season for being part of the Ohio State scandal where he was said to have sold memorabilia for benefits... but that should give him enough time to learn the speed of the NFL and be able to come right in to make an immediate impact.

Now on the clock: Bryan J. Boltik and the Indianapolis Colts