With the 30th pick of the 2012 Music City Miracles Mock Draft, the San Francisco 49ers (represented by J3G77) select: 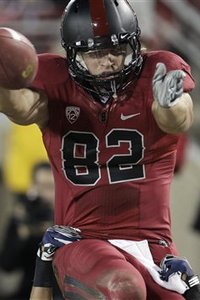 Even with the addition of Mario Manningham and Randy Moss, the 49ers would've liked to have added another big, fast receiver to their roster with Stephen Hill, but with him off the board they will turn their attention to a receiver of a different sort in Coby Fleener. Here are a couple of quotes to help explain why:

""Umm... did I forget about Vernon Davis? No. Jim Harbaugh loves utilizing multiple tight ends in his offense. If you don't think this can work, let me refer you to the Patriots. I'd say Rob Gronkowski and Aaron Hernandez complement each other rather well.
Harbaugh needs to acquire an offensive playmaker for Alex Smith even after the Mario Manningham signing, and Coby Fleener happens to be the best one available. It's also worth noting that Fleener's stock has gone up despite the fact that he didn't work out in Indianapolis because Orson Charles and Dwayne Allen were both highly disappointing."" - WalterFootball.com

""While Alex Smith is at the helm on the field, Harbaugh is still the coach. Harbaugh has great proficiency with multiple TE offenses and has already coached and built a relationship with Fleener. Smith has already shown comfortability throwing to TE's, and could use the extra blocking. Fleener had an excellent pro-day, notching a 4.45 40. But the most impressive part of Fleener's pro-day was his adjustments to the "poorly" thrown Andrew Luck passes."" - Drafttek.com

Now on the clock: z24lax and the New England Patriots