With the 27th pick of the 2012 Music City Miracles Mock Draft, the New England Patriots (represented by z24lax) select: 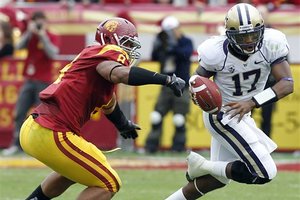 There is very little the patriots can do to improve offensively, but the other side of the ball can really use some work. A perfect scenario for this team would've been Mark Barron falling down here which would have help shore up a secondary that is shaky at best but has a couple potentially talented players returning at the cornerback position including the first pick of the second round last year, Ras I Dowling. But without that opportunity I expect they'll try and get help up front after losing Mark Anderson in free agency, and you have to be able to pressure the qb if you wanna win in this league. There were a few other players under consideration for this pick, including one on the other side of the ball! but I'll keep that a secret since the pats pick again in 4 picks I believe.

Now on the clock: Chris Colgan and the Green Bay Packers