With the 25th pick of the 2012 Music City Miracles Mock Draft, the Denver Broncos (represented by JustinS) select: 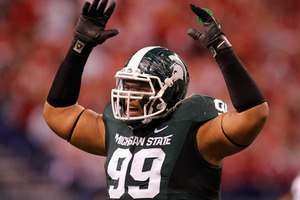 The Broncos are a little frustrated with how many DT prospects disappeared before they were able to pick but are still happy to get Jerel Worthy. At 303 lbs and 6-2, he is one of the most formidably sized DT's in the draft. For a defense that was 22nd against the run this last year, the Broncos will look to improve on the defensive front. They also need some help in the backfield with it succumbing to old age. Bailey isn't getting any younger and Brian Dawkins may very well retire. With most of the top players for those positions being off the board, the Broncos fill the another big need and still feel good.

Now on the clock: XAGMNINETY and the Houston Texans