With the 23rd pick of the 2012 Music City Miracles Mock Draft, the Detroit Lions (represented by MCM Hall Of Famer theologic) select: 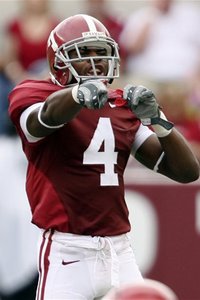 Mark Barron... because he's available.
Need more reasoning? Detroit's defense was not good last year against the pass. The struggles their secondary had covering wide receivers was evident in games like the week 17 game last year where Matt Flynn threw for 480 yards. Also, their DBs were exposed in last season's playoff game against the Saints and they were 23nd in passing yards allowed last season. Detroit brought in Jacob Lacey during Free Agency but he is not currently anyone's solution to anything. Detroit needs a CB to play opposite Chris Houston but the thing about Detroit is that they tend to draft best available no matter what. With Mark Barron still on the board he represents the best player available at a position that could use improving. Their starting Strong Safety, Amari Spievey, wasn't good last year, but he was a CB in college. Perhaps Detroit moves him back to CB, but either way I don't think their opportunistic nature will let them leave Mark Barron on the board if he's available with the 23rd pick.

Now on the clock: King Titan and the Pittsburgh Steelers