With the 22nd pick of the 2012 Music City Miracles Mock Draft, the St Louis Rams (represented by StPrattrick) select: 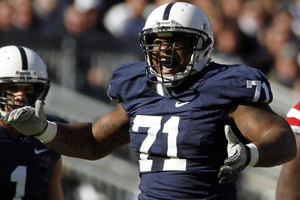 This just in: The Rams are terrible, horrible against the Run. Their current starting DT are both over the age of 30 and are nearing the ends of their contracts. With Robbins declining skill and nearing the end of his career, they must add someone to help anchor their D-line - that is where Devon Still comes in.

6-5/310 pound beast, that has a frame to get even bigger. Great burst off of the line for his size. Possesses good power on his bull rush, exhibits the strength to consistently drive blockers into the backfield and is also much more sudden laterally when his feet are under him.
A guy that could be a force against the run would be extremely valuable for the Rams. If they find a guy who can also push the pocket consistently, that will be a welcomed plus.
Chris Long and Robert Quinn would be no longer command a double team and they would be able to effectively rush the ball carrier/passer.
Plus, we are so wealthy in first round picks (Thank you Burgundy'sBrowns) why the heck not?!

Now on the clock: MCM Hall Of Famer theologic and the Detroit Lions