With the twentieth pick of the 2012 Music City Miracles Mock Draft, the home team (represented by Deaconbrodie) selects: 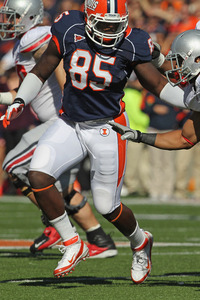 I thought a more thorough explanation and analysis of the 20th pick was necessary. This being the Titans pick and all.

I would have loved the Titans going with Mark Barron at #20 as I believe he could not only start on day one but be an impact player for the defense. But after resigning Babineaux and tagging Griffin a first round pick on safety won’t happen. Some Titans fans would like to see an offensive lineman taken in the first, especially center Peter Konz, but we just signed a guard in Hutchinson and it seems like the Titans brass are intent on grabbing a center in FA. After missing out on Wells and Myers they are now reportedly showing interest in both Jeff Saturday and recently released Eagles center Jamaal Jackson. (As reported from Rotoworld) The team obviously prefers a veteran at center as opposed to a first or second day draft pick.

Last month GM Ruston Webster said they will be looking for a special pass rusher. Since we missed out on Mario, and only just now added our third defensive end to our team in Kam Wimbley, I still believe DE will be a position we look at with the 20th pick. Remember we finished 2nd to last in sack totals. With the way this mock draft has fallen I see two viable options at the defensive end position. Nick Perry or Whitney Mercilus. This was a very tough call. Perry had an impressive combine. Initially I though Perry was too small; his playing weight was 250 but he came to the combine at 271. He is tough to pass up but I am going with Whitney Mercilus at #20. According to various scouting reports Perry was more up & down with his play (statistical example; 4.5 of 9 total sacks came in last 5 games), Perry was not rated as high against the run and ultimately he did not have the production numbers like Mercilus.

Entering the NFL, Mercilus is an advanced pass-rusher. He has a very impressive repertoire of pass rushing moves. He attacks with speed around the edge. As a counter to the speed, he has the strength to execute rip moves and shed offensive linemen. Mercilus’s 2011 numbers are very impressive. He led the nation in sacks (16) and forced fumbles (9). His ability to create turnovers once he gets to the quarterback is unmatched in this draft class. Mercilus also recorded 57 tackles and 22.5 tackles for a loss. Those are simply amazing stats and he did it consistently. And I don’t mind the one year wonder concern after finding out his background story. This past season he got his first opportunity to start. He was only a 3 start recruit coming out because he picked up the game later in high school. (His parents are immigrants from Haiti) He simply came of age in 2011 and is now capitalizing off a spectacular year just like Cam Newton and Jason Pierre-Paul.

Last year Mercilus played well against other NFL quality talent. He got the better of the best tackles he faced last season. Against Ohio State's Mike Adams, Mercilus recorded 1.5 sacks with a forced fumble. The Wisconsin Badgers' powerful offensive line couldn't contain Mercilus. He bull rushed through massive right tackle Josh Oglesby to get a sack-fumble on Russell Wilson. Mercilus also knocked out left tackle Ricky Wagner for part of the game.

Mercilus looks like the kind of guy we need to improve our pass rush. I am sure everyone will share their opinions so have at it! Just be happy, I was very tempted to take Zach Brown. (Just kidding; sorry Noles)

A note on Wimbley. There is a reason the Titans front loaded his contract. In 6 years of his career he has never been an every down DE. He was a situational guy in Oakland. And as much as we would love for him to be our answer at DE, I don’t believe he will ultimately be our long term answer for that “special pass rusher” that the Titans are looking for.