With the nineteenth pick of the 2012 Music City Miracles Mock Draft, the Chicago Bears (represented by Titans_Firefighter) select: 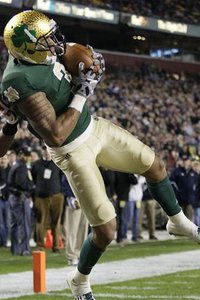 Well if the draft falls this way I know the Bears fans would be super happy with how it will turn out for them.

The Bears added a huge weapon for Jay Culter by trading for Brandon Marshall. That trade was a steal, Marshall standing at 6'4" with give Cutler a big red-zone target. But there is always concern for injury so drafting Floyd would be the insurance that the Bears need. Floyd is 6'3" is around the same size as Marshall and would give the same presents as Marshall in the red-zone. Adding Floyd to the Bears receiving core would give them starters of Marshall at #1, Floyd #2, and Earl Bennet who is a Vandy teammate of Jay as #3. Bears will still have Devin Hester as a WR but I believe that experiment is over, and there is no way of knowing if Knox will be ready to play after breaking his back last year. In a league where passing is becoming the 1st and 2nd choice for offense adding Floyd would help Cutler.
Thought about adding a DE in the first for the Bears because they missed out on Super Mario, but the DE left on the board don't have the value to the Bears as Floyd does. Can't wait to see how the rest of this draft shakes out and what I can get the Bears in the 2nd.

Now on the clock: DeaconBrodie and your Tennessee Titans