With the eighteenth pick of the 2012 Music City Miracles Mock Draft, the San Diego Chargers (represented by -Erock) select: 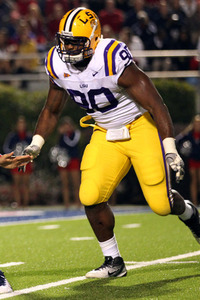 With all of the best Offensive tackles off the board at this point, the Chargers get a player once considered a top 10 Talent. Although a poor showing at the combine dropped his stock, this 6'6" long-armed monster wrecked havoc against defensive lines last year. He steps in day one to replace Luis Castillo at the end position (who I think the Chargers may still bring back for less money) and helps the pass rush by sucking up blockers and keeping them off the linebackers. A good showing at his pro day could boost his stock as his athleticism was on displayed in the SEC Championship game against Georgia.
With multiple holes to fill, this could be a best available pick. The Chargers still need to replace Vincent Jackson (Meachem isn't the guy) so they could take Floyd WR ND at this spot or fill the pass rush need with Nick Perry DE/OLB USC. The Chargers need a lot of help on the Offensive line and I expect them to address that in FA and in later rounds of the draft. For now, they get the player they thought they'd had in Luis Castillo a few short years ago.

Now on the clock: Titans_Firefighter and the Chicago Bears