With the fourth pick of the 2012 Music City Miracles Mock Draft, the St. Louis Rams (represented by StPrattrick) select: 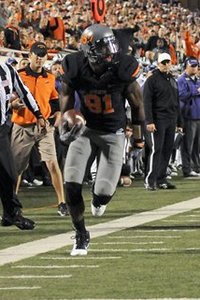 I was thinking about reaching for a DT here, but Blackmon is too good to pass(get it?!) up.
The Rams need someone else to give the ball to other then Steven Jackson. Adding Blackmon backs the defense off of the running game and takes some pressure off of Bradford. The Rams really don't have any WR threats especially if Brandon Lloyd leaves as a FA. Assuming they decided to re-sign Lloyd, the Rams might have a scary offense. There are still needs on the O-line, but that could be address with the other first round pick received by The BurgundyBrowns.

Now on the clock: Large Tuna and the Tampa Bay Buccaneers