With the third pick of the 2012 Music City Miracles Mock Draft, the Minnesota Vikings (represented by infinitystealth) select: 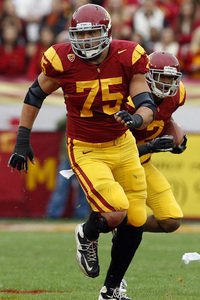 Matt Kalil is the BPA (after Luck and RGIII) and he fills the biggest need, at least on the offensive side of the ball, for the Vikes. Minnesota had a lot of problems with their O-Line this year, cutting McKinnie at the beginning of the season and replacing him with Charlie Johnson even though he is not suited for the LT position. By drafting Kalil, the Vikes will solidfy the LT spot for the next decade or two and ensure that Ponder can continue his development by having a trusted blind-side protector. As well, there is a possibility that with this pick, Johnson can move back to the more suited guard position, and as a result, the Vikes will be upgrading two positions at once.

Now on the clock: StPrattrick and the St Louis Rams