With the seventeenth pick of the 2012 Music City Miracles Mock Draft, the Cincinnati Bengals (represented by SoCalTitan) select: 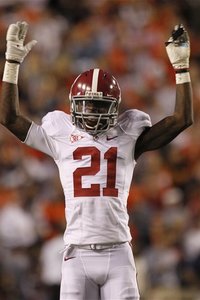 Our favorite fan in SoCal:

Bengals have major holes in the secondary and at the guard position as both starting guards are free agents. With their first of two 1st round selection I chose to go with CB Dre Kirkpatrick from Bama. Last season the Bengals secondary definitely missed Jonathan Joseph and was injury riddled throughout the 2011 season with Leon Hall tearing his Achilles. Drafting the talented Dre Kirkpatrick whom some might consider a risk after his pot bust at the beginning of the year but has since had the charges dropped we all know the Bengals franchise is not known for caring about such issues. Kirkpatrick is very very skilled for a CB at his size at 6-2 but the one thing he seems to lack is great hands. Pairing Dre with Leon Hall will solidify for the coming years. See you guys at #21...

Now on the clock: -Erock and the San Diego Chargers