With the sixteenth pick of the 2012 Music City Miracles Mock Draft, the New York Jets (represented by E-Locker) select: 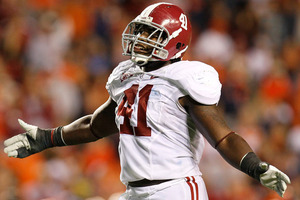 The Jets struggled to get after the quarterback this past season. Upshaw is the man to fix this issue. His combine was less than impressive, but anyone that watched him at Alabama knows that he is going to be a great NFL player. At 73 inches and 272 pounds he will be a handful for anyone to block. He has the high motor and the great instincts that make him a perfect fit for Rex Ryan's defense.