Share All sharing options for: 2012 MCM Mock Draft: At #15, The Philadelphia Eagles Select....

With the fifteenth pick of the 2012 Music City Miracles Mock Draft, the Philadelphia Eagles (represented by crazylegs28) select: 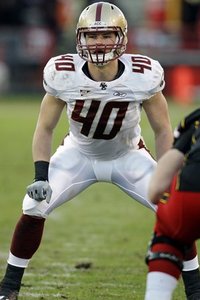 Linebacker has been an area of weakness for the Eagles for sometime and Kuechly looks like a good fit. The Eagles have a good front four and a secondary and its time they addressed their needs in the middle. Kuechly is a superb pass coverage linebacker which is a good thing to be good at in today's NFL. The Eagles have skipped over picking a linebacker for years and its time for that trend to stop.

Now on the clock: E-Locker and the New York Jets