With the second pick of the 2012 Music City Miracles Mock Draft, the Cleveland Browns (represented by ronburgundy7427) select: 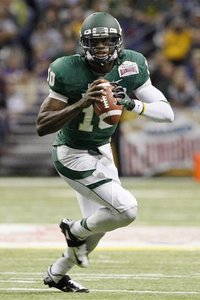 In an ideal world, the Rams can't find a trade they like, take Blackmon at two and the Vikings at three take Kalil, leaving "RG3" to the Browns at four and then get a weapon for him with their other first-rounder. Unfortunately, Griffin had a great combine on top of momentum already being pretty big behind him. So it looks like the Rams will trade out, and the Browns are in the best position to move up without giving up a "king's ransom". But more on that in a moment...
I'm not even sure I really need to justify this pick. Griffin is the consensus 1a to Luck's 1, and arguably could become a better player in time. Colt McCoy has shown flashes on occasion but nothing to excite or show that he can be the franchise QB that the Browns have been searching for since...since...have they ever had a franchise QB since they were reincarnated? I don't think it's too much of a stretch to say Griffin could have a Cam Newton-like impact on whatever team he goes to, and the Browns desperately need that excitement and hope.
Now a quick word on the trade...in reality the Rams may be able to get much, much more from even the Browns, but for our purposes and trying to be realistic, we both agreed that this was a fair move. According to the point chart we used, number two is worth 2,600 points; my two first rounders were 2,580 points so I threw in the fifth rounder to swing it in slight favor of the Rams with them receiving 2,620 points worth of picks for 2,600.

Now on the clock: infinitystealth and the Minnesota Vikings