With the first pick of the 2012 Music City Miracles Mock Draft, the Indianapolis Colts (represented by Bryan J. Boltik) select: 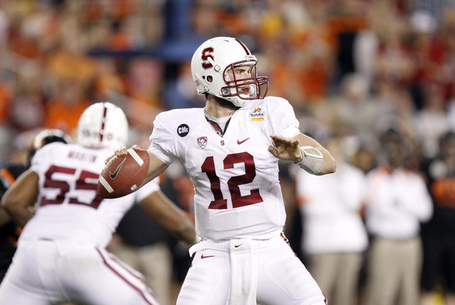 A lot of people have wondered if RGIII could move ahead of Andrew Luck for the number 1 pick because of his strong combine. A strong pro-day will certainly help his chances of doing so, but I still believe Andrew Luck will go number one. The Colts have a lot of needs, and I believe, just like Peyton Manning, he somehow fits more than one need. He is not just a quarterback, but he is a 'on-the-field coach'. A team with a new coach is going to want a player that will be easier to mold, and I think Luck is the better pick to reflect that. RGIII needs to have a team built around him. Andrew Luck seems like a guy like Peyton Manning or Tom Brady. Not future hall-of-famer so to speak (I doubt anyone is ready to make that assertion) but a player who can take anything and everything around him and make it that much better. He will work with what he has, and he will work well with it.

The Cleveland Browns (represented by Papa Burgundy) have traded up to be able to make the 2nd pick in the draft, sending both of their 2012 1st round picks and a 5th for this year to the Rams (the two GMs made the deal based on point values in this chart.) (And we know we are not doing a 5th round. Just go with it)

Now on the clock: ronburgundy7427 and the Cleveland Browns