Titans vs. Jets Film Review: Slide in the Pocket

Sliding in the pocket and getting through progressions are a couple of things Locker will need to work on this offseason in order to take the next step in his game.

Share All sharing options for: Titans vs. Jets Film Review: Slide in the Pocket

This will be a brief film review due to time constraints.

The play below jumped out at me as one of those where Locker needs to take the next step in development. On the first play of the drive in the middle of the 3rd quarter, the Titans come out in "21" personnel in an offset I look. Jets show a 2 high safety look. The Titans will execute a play action to CJ. 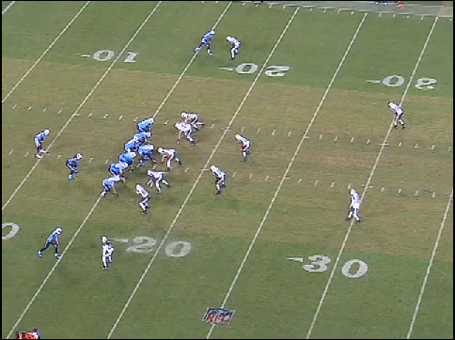 As the ball gets snapped and Jake turns his head to the defense, the Jets roll a safety down, and one over the top. They are now in a 3 deep look. Protection is excellent. 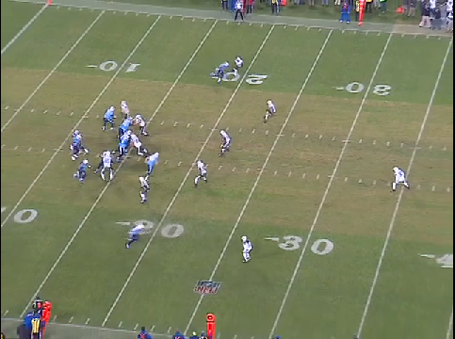 OK. So, here's where things need to improve. At times, Jake struggles with progressions post snaps and getting away from one side of the field to the other. He's not necessarily uncomfortable in the pocket, but he does struggle with using the space in the pocket from time to time.

Pocket is still clean below. Because Jake is lasered in on Kenny Britt, the single high safety begins to creep over. Now to the backside of the play, Nate is getting vertical as well, and will execute a skinny post to get just inside his defender. Nate isn't necessarily wide open (such is the case with most throws in the NFL), but he easily presents a better option than the soon to be double covered Kenny Britt. What you'd like to see here is a intentional manipulation of the safety to Kenny Britt, a slide in the pocket, settle feet, and cut it loose to Nate. Instead, Locker stays focused on Kenny Britt. The safety reacts, and a throw is made into double coverage. 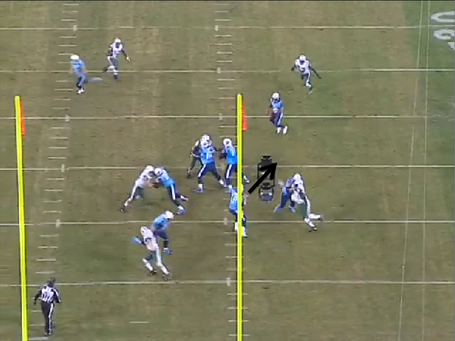 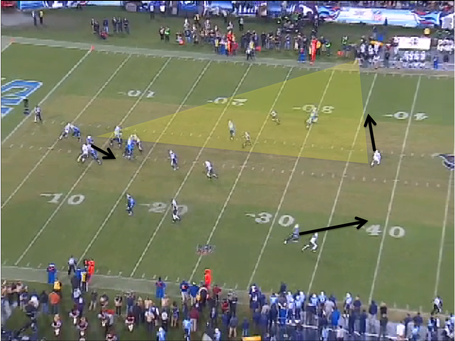 These things need to improve if Locker is going to take the next step as a QB. At this point in his development, I'd expect to be seeing more of these kinds of things, but of course that doesn't necessarily mean that they won't come eventually. I think Jake will find that if he learns a better feel for space in the pocket and how to use it, then it will make a lot of other things easier and really begin to open up other things for him in the passing game. I expect that once we get into the offseason I'll have an exhaustive series of posts on our young QB's development this year, both good and bad.