There is no doubt the pick six that Jake Locker threw in the third quarter of Sunday's game against the Colts was what did the Titans in. Good teams can overcome a mistake like that one, but the Titans just aren't a good team right now.

Let's take a look at what Locker saw pre-snap: 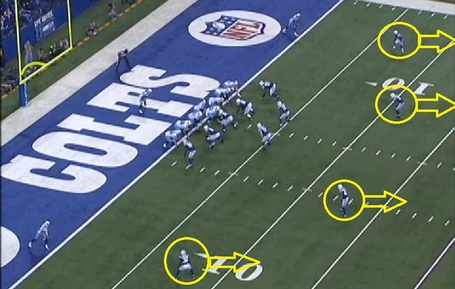 The arrows on there are my guess as to what Locker thought he would see in coverage. After conferring with MCM tape guru SuperHorn (MCMTGSH), my best guess is that Locker thought the Colts would be in "quarters" coverage (meaning each of the 4 defensive backs would be responsible for a deep quarter of the field) or a soft man coverage.

Previously, MCMTGSH has linked a podcast with Greg Cosell talking about how Locker pre-determines a lot of throws. There are times where he clearly decides where he is going with the ball before the snap. You can see him stare guys down at times.

This was probably one of those times. Locker thought he was going to have soft coverage on the outside and would have no problem getting the ball out to Nate Washington. 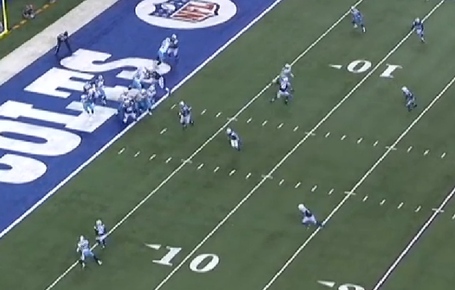 Cassius Vaughn attacked down hill and the ball never had a chance of getting to Washington.

This is an inexcusable throw at any spot on the field, but especially when you are backed up on your own goal line. Locker is going to have to get better at reading these types of things if he is going to be a quality NFL quarterback.