Titans vs. Jaguars: The No Huddle

In a competetive environment and faced with difficult situations, sometimes desperation can breed innovation. Down 5, with 13 minutes to go against a one win Jacksonville, and having not scored a touchdown yet in the game, the Titans reached into their bag of tricks. With their back up against the wall and his job on the line, Tennessee looked to the no huddle for a solution. One bad throw excepted, the strategy worked.

Share All sharing options for: Titans vs. Jaguars: The No Huddle

Sometimes in the darkest, most desperate times for teams, the bright, creative and innovative ideas are born. Backed up against a wall, a coach is often faced with a basic question: What is the simplest, quickest fix I can find to make things work? The Titans's answer was the no huddle. We weren't down multiple scores. We weren't facing prevent. Our offense had simply stalled. Tennessee turned to the no huddle for spark, and that's precisely what we got. 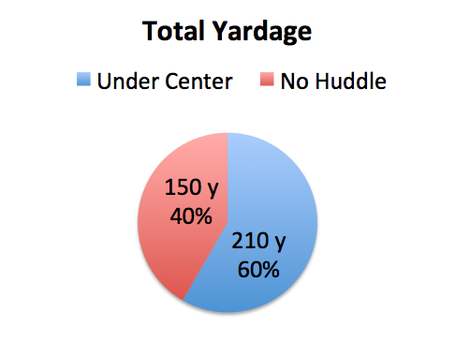 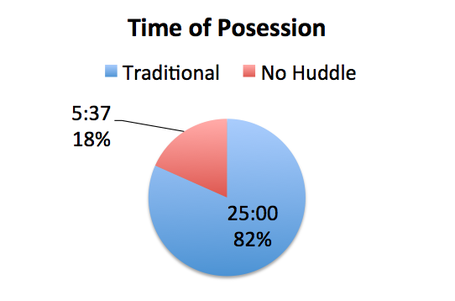 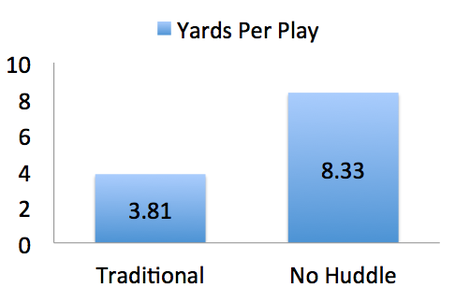 Everything in context. We can't just take these numbers and extrapolate them to a whole game. Still, the production is meaningful. On the first no huddle drive, we were only down 5 with 12:00 to go, so the game was still very much up for grabs. On the second drive, there were 7 minutes left and we were only down 9. The defensive playcalls might have gotten a little more conservative, but it's not like they were facing prevent defenses at the end of a game. When you score 52% of your points (should have been even more if the DWill catch stands) on 18% of your TOP, it's probably something worth looking into.

The thing that probably jumped out at me most was that, while this move was an innovative step in the right direction, the way it was handled still only scratches the surface. On both drives, the Titans stayed in a single formation each time until the last play of the drive.

^Note here, I'm excluding the 3rd drive where Locker threw the pick. I won't analyze that drive as it was cut short by a bad throw. Those plays are built into the statistics above, however (not that it influences them much). 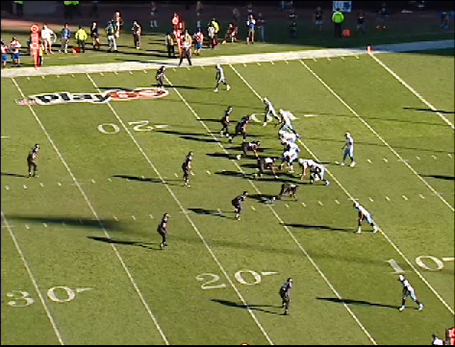 This was the base formation for the entire drive. One time the bunched the receivers to the right. And, on the last play they threw from a balanced 2x2 look with a RB in the backfield. So, what happened on this series?

We've all heard about simplifying things for a young QB. Many of you have also probably heard about cutting the field in half. That's what the Titans did on every play of this drive. From top to bottom, receivers are Wright, Washington, Cook, Britt, and CJ. A couple of times the positioning was swapped on either side of the formation (Britt/CJ, for example), but at all times the grouping of Wright/Washington/Cook was to one side, and Britt/CJ to the other.

Let's look at the break down of catches:

Short right - Williams - Incomplete (should have been TD)

They then tried the wheel route to Reynaud to the weak side, and then a throw to the right to Wright for an incompletion.

When you look at the still above, the first thing that jumps out at me is that we've got a 3 on 2 matchup on the boundary side of the field. With that matchup exposed, the Titans put their foot on the gas and exploited it for an entire drive. Every throw is reading the 3 on 2 and throwing to the open man. This simple concept yielded powerful results, and probably should have resulted in a TD if the referee calls the play differently. Regardless, the offense that had been unable to score for most of the game marched 72 yards (their longest drive of the game thusfar) in under 10 minutes to put points on the board. 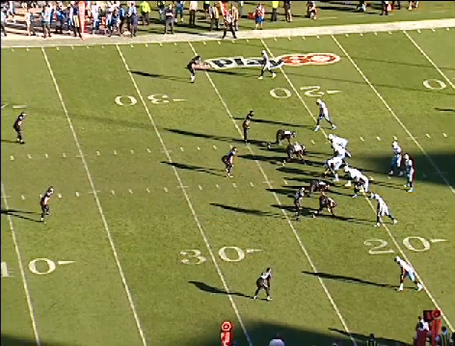 Plays run from this formation, in order, were outs from the slot positions, slants, verticals, and curls. Those four simple plays move the team 41 yards in roughly one minute. Then, they kept the personnel in tact, but changed the look. 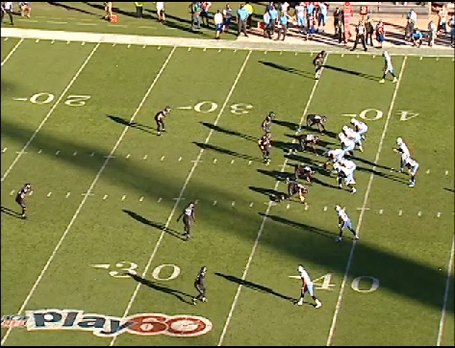 The balance of the formation stays the same, but Cook is now moved to the end of the line of scrimmage as a blocker. Jags show two high with 6 guys in the box. Titans have 6 guys into block, which sets up a good running situation. The play run is a simple power play. Hutch pulls at left guard, CJ follows him through the hole created on the right side of the formation, and it goes for 31 yards. 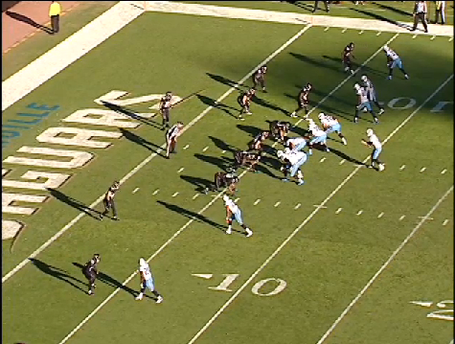 After the big run, the Titans quickly make a substitution (Reynaud for CJ), but remain in the no huddle. They then shift to empty again. An obvious mismatch presents itself. Kenny Britt is in man coverage in the slot against safety Chris Prosinski. They run a smash concept to the field side. Britt's flag route beats the safety to the corner, and Jake places the ball well for a touchdown.

All these things are excellent to see, especially considering we saw them implemented at a time in the game before the no huddle was totally necessary. They could obviously be improved, though. Instead of limiting themselves to packaged formations, you'd like to see more balance, and different formations to keep the defense on their heels. Even things like a few jet sweeps mixed in could open up some interesting things offensively, though that might be asking a little much.

In any event, I'd like to see the Titans throw in some mixes of the no huddle (or run it as a base offense) moving forward. Locker appears comfortable in this setting, and, in many ways, it makes things easier on a young quarterback. The question is: Can we really expect Loggains to run this sort of offense?

Answer: Maybe he already was... 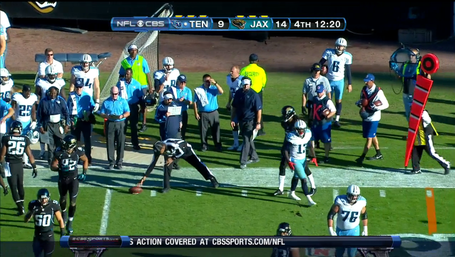 Hint: Look for the little man behind the referee..