Mike Munchak, for all his accolades and loyalty, is not cut to be an NFL head coach. This was apparent in week 1 of his first season when this team was beat by a Jaguars team led by Luke McCown. He may lack excitement but his biggest problem is that he does not possess the ability to lead and inspire his players.

Munchak's steadfast attitude has been a cause for concern for a while, but it is now this teams biggest problem. The coaches know why we get beat, the players know why we get beat. But week after week, we simply try to move on and play better. This is not the answer. Well what do you want him to do? Do the job of a head coach. Coach his players to tackle better, to settle down with the penalties, to block better, run better, to do everything better. Isn't that why he was he was hired? Because as an organization, we were tired of treading mediocre water and wanted to take a step forward.

Well the Titans are no better. We have a fair option on offense which is new, but we also took steps backwards on defense. We have the ability but just seem to go through the motions instead of actually competing. I notice every game. We lack urgency when down, no hurry up offense until we are in the 4th, runs on 2nd and long despite losing control of the game. The team simply goes out and plays football.

A few days ago, during player interviews, most players discussed there plans to spend time with their family once they get off "work". This is indeed a job and these players are employees and employees will only go as far as their boss can carry them. If your boss fails to inspire you to do your job to the best of your ability, then you will perform poorly. Simply put, Mike Munchak is not getting anything out of his guys. We have had a major makeover on both the offensive and defensive side of the ball. It is now time to make another change in leadership. Mike Munchak has lost both this team and this once hopeful season. It only makes sense he lose his tenure along with it. Because not only are we fans, but we are also shareholders. And as shareholders, we deserve a better product than this. And with the season finished, what else is there to do but complain? Anyone? Didn't think so. So with that being said. RABBLE RABBLE RABBLE!!!! 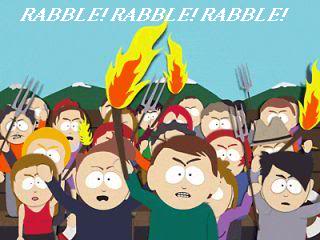