Titans vs. Colts Film Review: When Checking Down is the Only Option

There's a common misconception that all Matt Hasselbeck does is check down. With broadcast angles being what they are, it's almost impossible to make those judgements when watching the game live. As we'll see, sometimes the checkdown may be the only (and best) option on a play.

Share All sharing options for: Titans vs. Colts Film Review: When Checking Down is the Only Option

The Titans began the second quarter with aggression by taking a shot down field to Kenny Britt that was later called back for OPI. Following a couple of plays, and a false start penalty, the Titans looked at a 3rd and 19. From a fan perspective, I think many look at a situation like this and simplify it to, "call the deep pass play that picks up long yardage." While there's some merit to that, understand that the situation is fluid.

Plays aren't run against static defensive formations. Defenses react and adapt to down and distance. Often times this leaves us frustrated, wanting to blame the OC, the QB, or both. As we'll see below, sometimes the playcall is great, the QB makes the right circumstantial decision, yet the result is not what we desired. 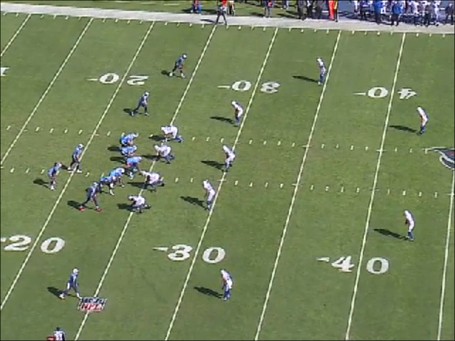 Above, is a clean still of the pre snap look. Down and distance is 3rd and 19. Titans are in "11" personnel. Britt and Nate are stacked to the left. Cook is offset at tight end. Wright is isolated to the right. The Colts show a two high look with a soft corner to both sides, which is what you'd expect in this down and distance. 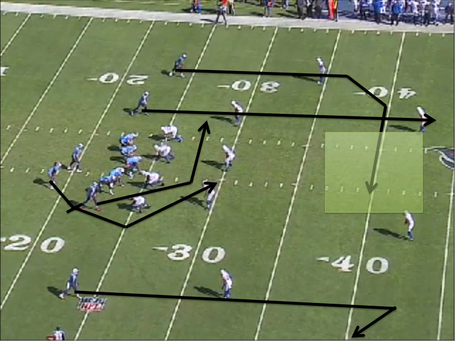 Above is the playcall. A dagger route combination is called, a common deep route combination called that's effective against a number of different coverages. The most important aspect of this concept is it's ability to attack the deep middle of a zone defense.

The important thing to look for here is to the field (top of screen) side of the play. The basic concept is simple. Nate Washington is going to work up the seam. His role in this play is to occupy the safety and clear out the middle of the field. Kenny is going to run a dig route (deep in). If the team is in zone, and protection holds up long enough, this throw is likely open. The corner will release the receiver to the safety, who's in a jam because he's responsible for the seam route. The box shows the primary read and purpose of this play.

To the boundary side of the field, Cook runs a drag which could also potentially provide a big play with both of the field side receivers clearing out that area with deep patterns. Wright is running a comeback route on the outside (though if I had to guess, he's probably on a reader here). His goal on this play is mostly to run a deep enough pattern to occupy the boundary safety, so Britt can sit down underneath him over the middle.

Last, CJ is going to check protection, and then provide a checkdown for Hasselbeck over the middle. 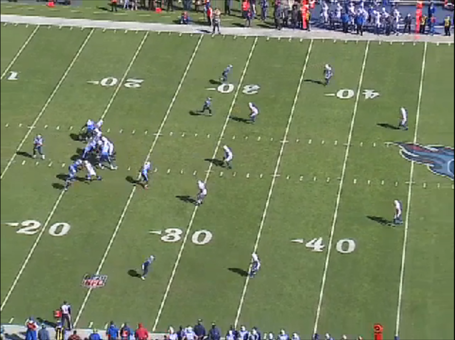 Ball is snapped. Receivers get into their routes. CJ checks protection and then gets into his route. Protection is fine, for now. 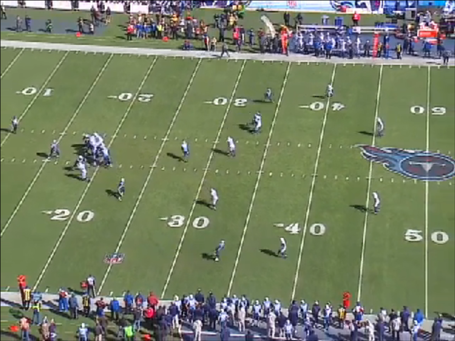 Protection is still decent. Hasselbeck is keeping his eyes to the left side of the field, waiting for the slow developing route to break loose. 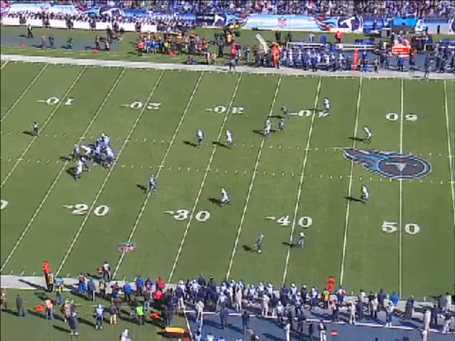 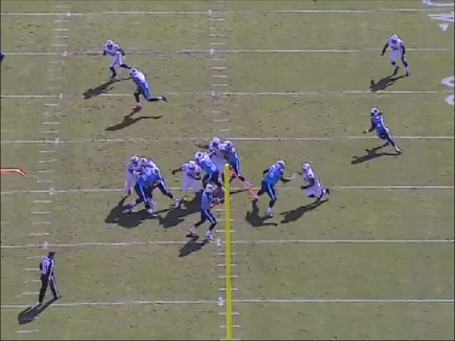 This is where the play breaks down. The LDT stunts here, which creates a lag for the pressure to develop, but once the stunt is completed he is breaking free right down Matt's throwing lane. No choice here but to check down, which Hasselbeck does. 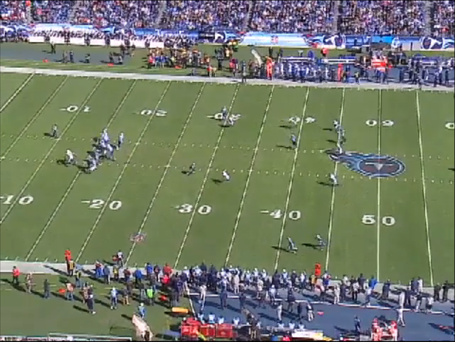 Note Britt on this still. If allowed time to develop, Britt likely gets targeted and has the opportunity to pick up a few extra yards and get the first down. 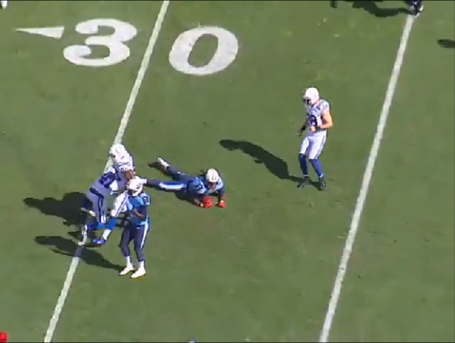 CJ takes what he can get, and we punt.

As fans, I know that these kinds of things can get maddening at times. The knee jerk reaction is that we should always be throwing to or beyond the sticks, but the situation doesn't always allow that. The problem is further complicated by the lack of information given from broadcast angles, which leaves all of us guessing as to the causality of the plays result.

The play above is only that - one play. The hope is that it gives some perspective on the number of external factors that can influence a plays result or the QBs read. This time it was pressure. Other times, coverage and/or scheme just wins on a play. If every play called was 100% effective against every coverage in the book, we'd be putting up 70 points a game. Unfortunately, plays don't always go as planned, and the QB is left to just take what the defense gives and live to see another set of downs.