Titans vs. Colts: A Haunting Image

A look at a 4th quarter play screen pass the Titans set up perfectly. Unfortunately Chris Johnson dropped the pass.

Share All sharing options for: Titans vs. Colts: A Haunting Image

It is the Halloween season and millions of Americans have got to haunted houses over the last few weeks. The Titans, much like last season, will be haunted for a while after a loss to the Colts. We talked this morning about points left on the field. Here is another visual of a potential big play for the Titans that was missed: 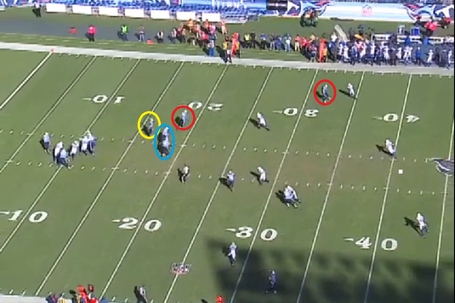 This was the first play on the Titans' last drive of the game. The Titans, finally, called a screen pass and had it set up beautifully. The only problem was CJ made a terrible effort to catch the football.

We have talked about this before, but for some reason he just cannot catch the football when he is on the run. He hasn't been able to do that well in his entire time here, and you would think that the coach staff would eventually take the time to get that fixed.

There is a very real chance CJ takes this ball to the house if he catches it, but worst case scenario he gains 20 yards.

It is unfortunate that this play happened because he ran the ball extremely well in this game. It is just too bad somebody couldn't "make a play" to help the Titans get a win.