Titans vs. Colts: Leaving Points on the Field

Share All sharing options for: Titans vs. Colts: Leaving Points on the Field

So we have all had a little bit of time now for the loss to the Colts to sink in. It really was a tough pill to follow because there is no reason this team should lose to anyone, much less a team with a defense as bad as the Colts, when they only score 13 points in regulation, but the Colts won this game because they made the big plays and the Titans didn't.

Sure, if the refs don't blow the call on the fumble the Titans are in really good position to attempt a game winning field goal, but if the Titans make the plays they should have made earlier in the game they never would have been in a position where one call changes the outcome to the game.

The difference between winning and losing in the NFL is very slim, especially when you are a mediocre team. You cannot afford to miss field goals a 45-yard field goal that would put you up by 7 late in the fourth quarter, but that is exactly what Rob Bironas did on Sunday. That games takes on a much different complexion if the Titans are up a touchdown there instead of four. The field goal on the next drive, which he barely made, probably would have put the game out of reach.

The other is this play. You will remember it, and the picture is worth a thousand words: 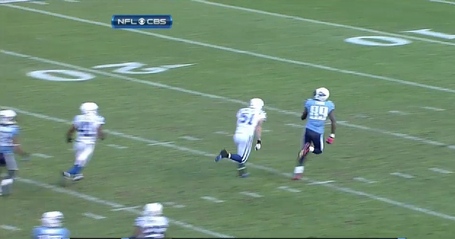 Cook was clearly single covered by a linebacker- a match-up he is going to win 101 times out of 100. All Matt Hasselbeck has to do is put a little bit of air under the ball so Cook can run under it. He, instead, threw a line drive that fell harmlessly to the LP Field turf.

Also, it helps to play 11 on defense at all times.