Titans vs. Bills: The Penalties

Breaking down the penalties the Titans committed against the Buffalo Bills.

Share All sharing options for: Titans vs. Bills: The Penalties

The first penalty of the game was called on Derrick Morgan for jumping offsides.

That is what we call a no-doubter.

The second penalty was a bad call, in my opinion. Michael Griffin was called for unecessary roughness on this play: 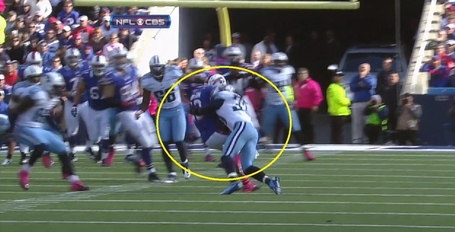 I really don't know what Griffin is supposed to do here. It is the safeties job to separate the receiver from the ball without leading with his head or hitting the receiver in the head. You can see from this picture that this is clearly a shoulder to shoulder hit. I wasn't aware that those were illegal.

The third and final penalty was a delay of game.