Titans vs. Bills Film Review: The Evolution of Chris Johnson

Call it confidence inspired by consistent runs from the past few games, or commitment to the play as called that's borne out of trusting his blockers against an inferior opponent. However, you see it, Chris Johnson is running differently today than he was to begin the year.

Share All sharing options for: Titans vs. Bills Film Review: The Evolution of Chris Johnson

Like all Titans fans, the long run by Chris Johnson in the first quarter jumped out at me. Though, what really struck me as impressive wasn't necessarily the result, but how he arrived at that result. Eh...who am I kidding? The result was more impressive. Kid's still got wheels. On that play, he'd give Olympic sprinters a run for their money.

That said, for the purpose of this article we'll look into one thing - Is Chris Johnson is running differently? I'll save you the suspense. The answer is yes. His world class speed only magnified what can happen when he trusts the play, and trusts his team mates.

I actually analyzed this play earlier this year. To begin the game against the Patriots, the Titans ran their basic staple: inside zone. You'll probably want to go back and check that out for a more in depth break down of the play, but the Cliff's Notes are below. 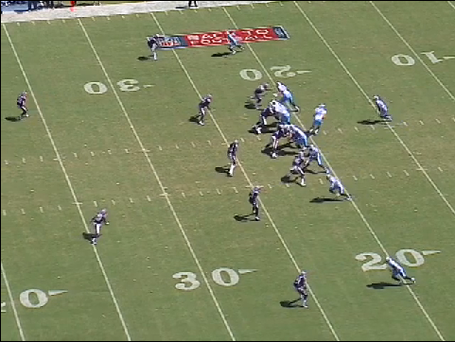 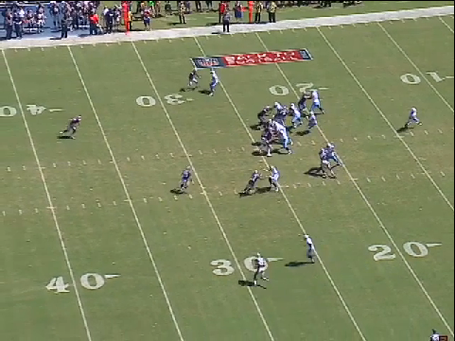 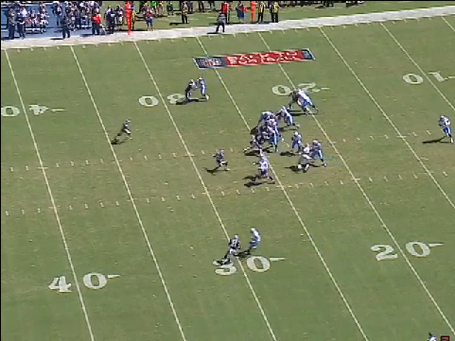 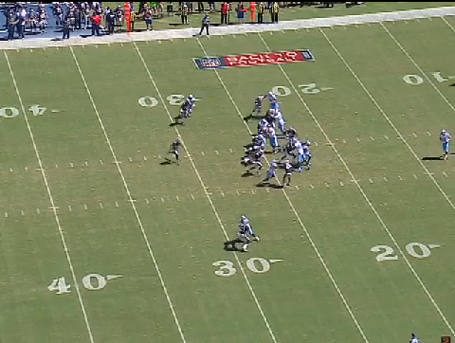 You might be thinking that the above run is horribly out of place, but, as we'll see, the play is the same as the highlight reel run against the Bills. In the stills above, the slot receiver is responsible for the backside defender, whereas we'll see that the fullback takes this responsibility in the Buffalo run. There's clearly a hole above when CJ cuts back. Instead of attacking it, and trusting his blockers, Johnson tries to spin to the edge. The result is a minimal gain. 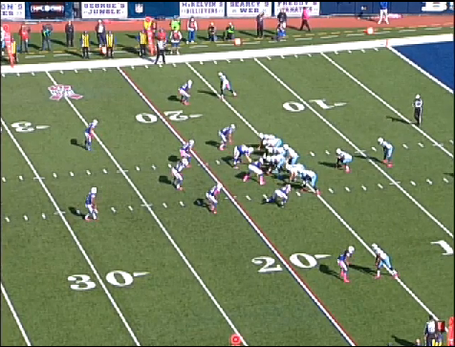 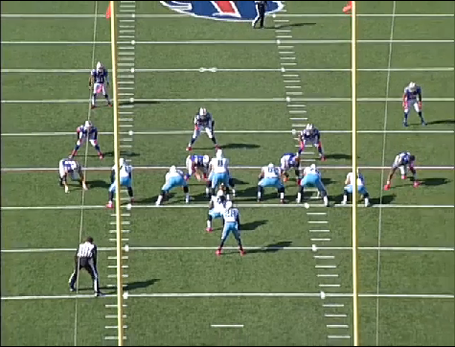 Titans are in "12" personnel. What we will see is another inside zone play. CJ will target the RG's hip, read the defense, find a vertical crease, and go. There's a great breakdown from Smart Football about this play and how it works. From that article is this diagram, which is exactly how this play is blocked (with the one exception being that the LT takes the end and QJ takes the backer) : 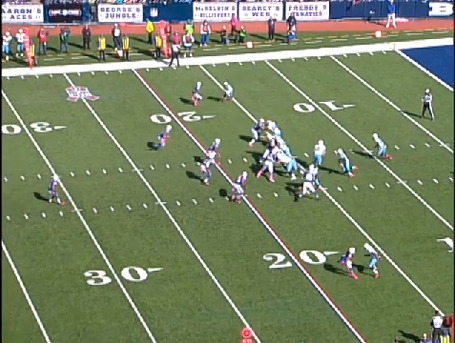 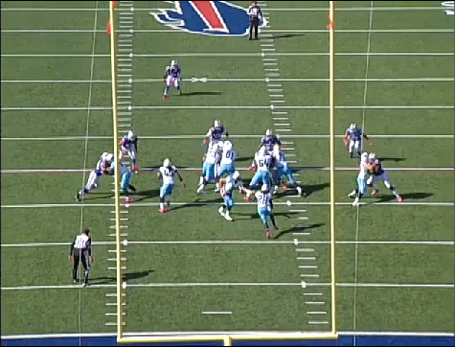 At the exchange, the playside is clearly not there as there's a defender pursuing that gap. The obvious play is a cutback, which CJ takes. 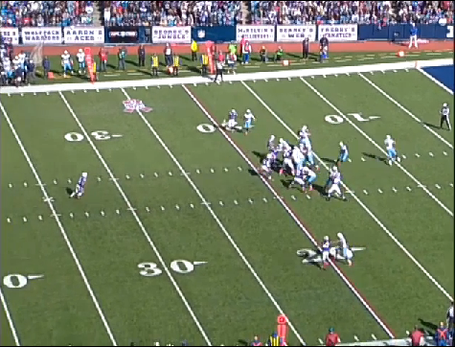 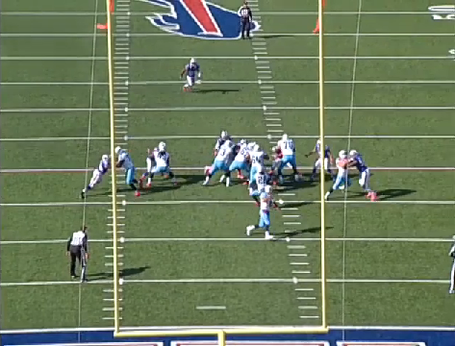 These stills are important because it provides great contrast. Go back and look at the play from the NE game at a similar point in the run. If anything, the cutback lane is actually larger against the Patriots. CJ commits to his blocking and it pays huge dividends. 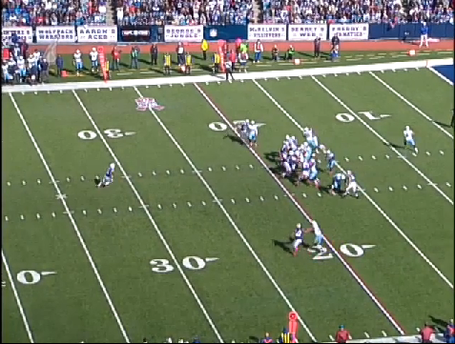 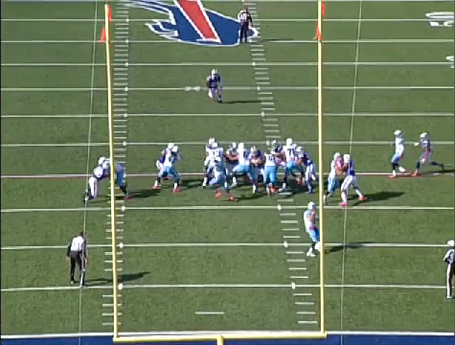 CJ attacks the hole. He trusts Roos and QJ here, and bounces the run between them. 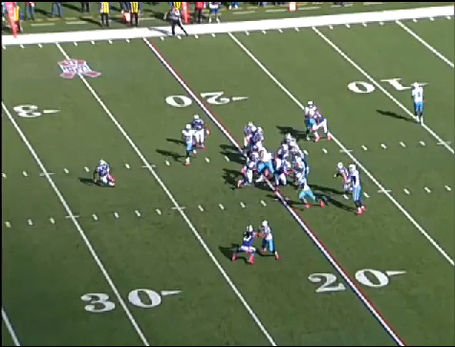 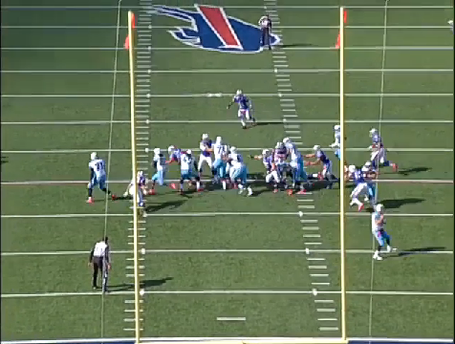 Even in this shot, I fear that CJ may have tried to bounce this run outside. Instead, he attacks the open area of the field. CJ's speed is such a weapon, but it's irrelevant when he's constantly hesitating and bouncing. Against a traditional back, this run goes for 10-15 yards, and the safety can close. With CJ's speed, however, this goes for 6 points. Trusting his blockers, and trusting his wheels can result in special plays, even with the smallest crease. 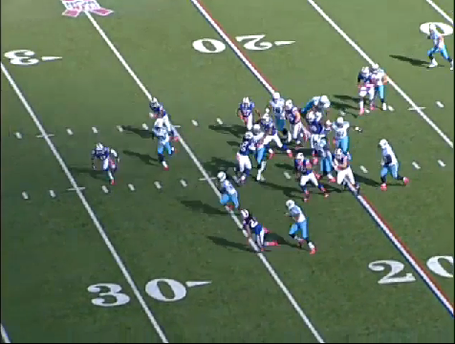 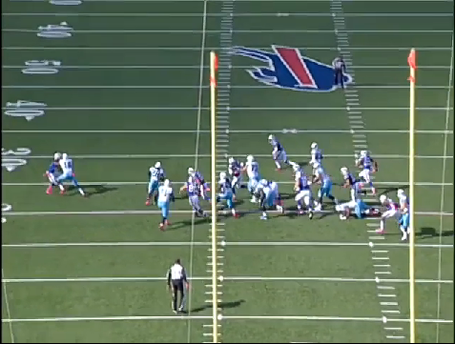 I've seen huge progress from CJ over the last few weeks, and it culminated in a great performance on Sunday against the Bills. Does this mean "he's back"? Hard to say. We need to see this same kind of commitment to the basics against superior opponents. Ironically, it was CJ taking what the defense gave him and not looking for the homerun that resulted in this explosive play. And, I think that is important. It allows the coaching staff to put this up in the film room and show that good things happen when you aren't constantly trying to press the play outside.

I think that our final opinion needs to be reserved until we see some more difficult competition, but I also think it would be foolish to just dismiss this game based on level of opponent. Chris Johnson played exceptionally well on Sunday, and for that he should be commended. For the team's sake, let's hope he sticks to the boring basics, because it could result in highlights and wins.