Chris Johnson's 83-Yard TD Run: That's How You Draw It Up

Chris Palmer could not have made this play look any better even if he was using X's and O's on a white board.

Share All sharing options for: Chris Johnson's 83-Yard TD Run: That's How You Draw It Up 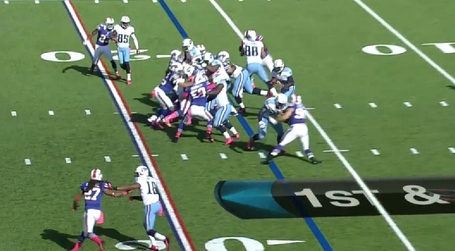 Everyone loves a good GIF, but as you can see in the still shot above, every single Buffalo defender is blocked on the play. We talk about Chris Johnson being back all day long, but the fact is that most every running back in the NFL would have gotten a big gain on this play. The credit for this one goes to the offensive line.

Most of the talk the last two days has been about how CJ only had a good game in this one because of how bad the Bills run defense is. There is no doubt that there defense being terrible helped here, but the offensive line that we saw in the first two weeks of the season couldn't block air. They have improved as the season has gone along.

Are they there yet? No, but now the rushing game has looked good in three of the last four games. Two of those games (Houston and Pittsburgh) were against really good run defenses. There is light at the end of the tunnel.