Titans Get Huge Break in Win Over the Steelers

It takes a little bit of luck to win in the NFL.

Share All sharing options for: Titans Get Huge Break in Win Over the Steelers

That is the Titans team that I expected to see this year. The defense isn't very good, but they can get some stops in key moments and give the offense a chance to win the game. Matt Hasselbeck and the Titans offense were able to win that game last night, but they got a huge break on the way to doing that.

Hasselbeck threw a pick on the Titans first offensive drive of the fourth quarter. That pick set up a 52-yard field goal by Shaun Suisham that put the Steelers up by 7 with just over 8 minutes left to go in the game.

After Chris Johnson had a 12-yard run on first down on the Titans ensuing drive, this play happened: 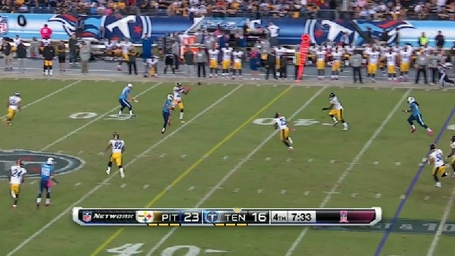 Matt Hasselbeck threw the ball behind Nate Washington. He and Washington haven't seemed to be on the same page at times, so this could have been one of those cases where he expected Nate to turn outside instead of inside, but we don't really know that. Keenan Lewis clearly should have picked off this pass, but:

the ball bounces off Lewis's chest and the Titans put together a drive that ended with Kenny Britt playing the tip drill to himself in the end zone.

There are always one or two plays in an NFL game that change the course of the game. This one went the Titans way last night.