Breaking down the the blitz that sidelined Jake Locker.

Share All sharing options for: Titans vs. Texans Film Review: Identifying the Blitz

On the second drive for the Titans against the Texans, Tennessee faced a 3rd down and 7. The Titans rolled out what's become almost a base package for them in passing situations. 11 personnel with a 3x1 look. 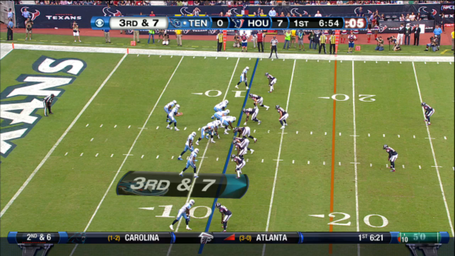 Texans disguise the blitz well here. I'll give them credit. It's worth noting, however, that the Texans have Glover Quin, their safety, matched up against Jared Cook. Texans are in a Big Nickel given the 2 high look pre-snap.

Locker has 5 guys into block. There are 5 guys in the box, with one just outside the box (Quin). Also note the positioning of the other two safeties, Manning is shallower and lined up right over the top of Cook. Demps, the other safety has more depth. The first thing Locker needs to be watching post snap, even if it's just a glance, is the rotation of those safeties. As that's a potential sign of things to come. 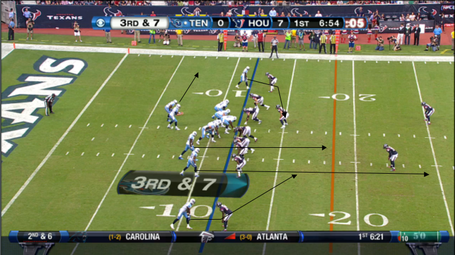 Above are the route patterns run. It's likely that Cook converts to a hot route here. If I had to guess, I'd say his original pattern was some kind of an out route. 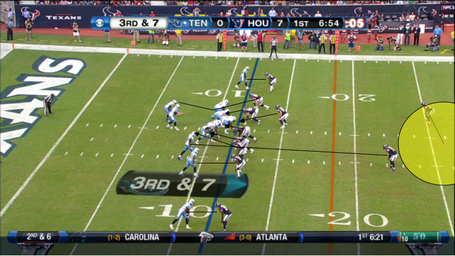 Finally, this is the look the Texans will bring post snap. They show a 2 high look, but will roll the safety deep middle. The Weak Side linebacker (Barwin) is going to show initial pressure, which Roos/Locker must account for. He then peels off and covers Ringer in the flat. This will prove important as Ringer being covered when Locker checks down. Even with him peeling off into coverage, this must be treated like 6 man pressure. And, when there's an extra man coming, that's the QB's "guy". Locker is responsible for that defender (ie. he beats him by throwing hot).

Back to the coverage, pressure is brought creatively, but at the end of the day they are just in Cover 1, Man under, but they've overloaded a side. Because Barwin brings initial pressure, and they bring pressure from the inside linebacker, Roos, Hutch, and Velasco all must account for a defender to the weak side. What this leaves is an overload to the strong side. By bringing pressure from the safety position, the defense is now working 3 on 2. 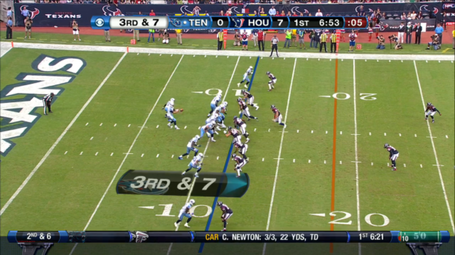 Ball is snapped. Safety starts to rotate. There's a potential here that Jake sees the underneath safety and thinks they are in some kind of a Robber look. Also, Barwin shows pressure meaning that Ringer should be open as an outlet. The ILB is blitzing, so Wright should be open over the middle. 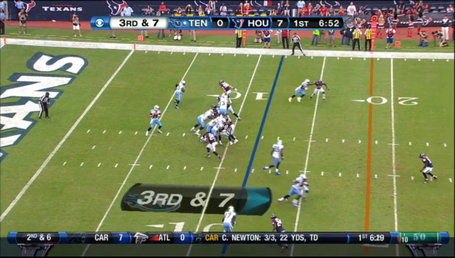 Wright doesn't win his route initially, which is where Locker takes his frist read. Worth noting, he actually bends this route back outside, which may or may not have been by design. If he keeps running here, he may get open.

The obvious thing you'll see is that Cook is running free. Ringer and Wright are both covered. Locker's got to get his head around here. The Safety is his responsibility. I get what he was up against here. Tight coverage and a good disguise by the WLB, but he's got to either get this ball out immediately to Wright on the isolation route or get his head around to the backside of the coverage. 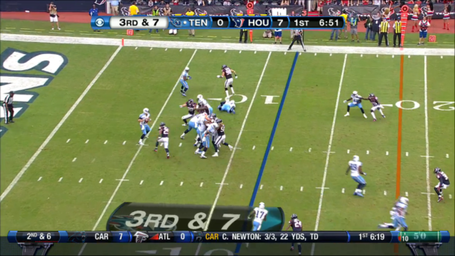 Locker has now checked down to Ringer who's covered, and he's essentially about to made into a tackling dummy. Rare are the times in the NFL where a defender gets a full speed blindside shot like this.

I'll save you all the result. This is twice now that we've seen this happen (Saints last year). Lapses in reads likes this, especially those that become a recurring theme, are the kinds of things that end careers. Locker's got to find this free blitzer. Whether it was Wright not winning his route, or a great disguise by the defense makes no difference. At the end of the day, this extra man is his responsibility. The right read here results in a 1st down. The wrong read results in a potential multi week injury.