This week will be a little different.  At least for this edition, we will be breaking down a play that highlights what's wrong with the run game, instead of breaking down a major play from the week.  Pictures are worth a 1000 words (but less than 100 yards), so I won't waste any more time up here.  Follow me through the jump for more.

This first one is a great place to start.  It would seem that the fanbase falls into two camps:  Blame CJ or Blame the O-line.  This play will illustrate that there's plenty of blame to go around.  Even on one individual play, we will see that it's possible for both the Offensive line and Chris Johnson to fail.  Obviously, this is not the case universally, as there are individual successes and failures on many plays.  But, this play should, at a minimum, illustrate that you don't necessarily have to take sides. 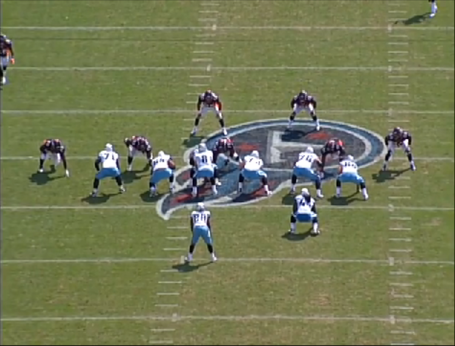 The first thing to notice here is numbers.  7 blockers.  7 defenders. 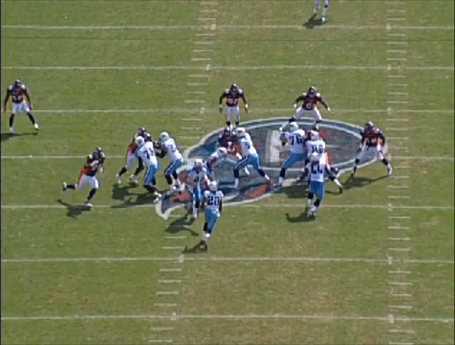 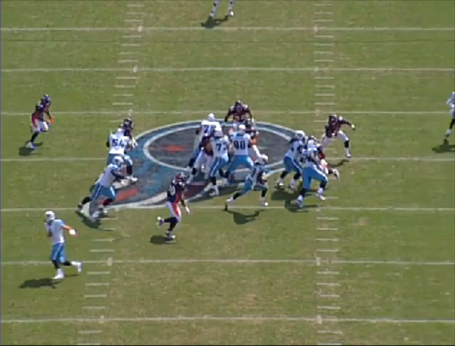 Ok.  So this looks like a mess.  Let me summarize what's happened in the sequence of the two frames above.  Roos is chasing his defender on the left.  After the snap, Harris began to pull to the right (by design), and Roos elected to double team the DT as opposed to blocking the DE.  This may have been by design.  Regardled, the DE came to the backside unblocked.  Amano is blocking the DT to his left, with Roos.  Scott is blocking the DT to his left.  All of these defenders are being blocked to the back side of the play.

On the playside, Stewart and Stevens are initially in a double team on the playside DE.  Stevens has him handled (middle of the screen), and Stewart peels off to the second level.  It doesn't matter as it relates to the end result, but note that Stewart completely whiffs the Will linebacker.  Johnson (FB) is blocking the Sam linebacker.  The Mike linebacker is running free, and Harris is pulling to block him.

Now to CJ.    Look at that hole between the TE and FB.  Is it huge?  No.  It's 2nd and 6, though, and 3 yards sure would make 3rd down a lot more manageable.  The Mike linebacker is moving to the edge, and there's no way Harris is getting there on time.  Just look at the positioning.  Moreover, look at Quinn Johnson.  He can seal his defender to the outside, but he's no help if CJ runs to his right.  This is a case where CJ just needs to take what the defense is giving him.  Instead, he stretches the play out. 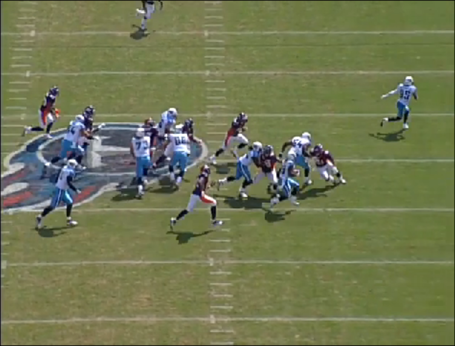 Harris whiffs on his block.  Quinn Johnson can no longer hold his defender.  CJ has no where to go.  -3 yards.

So, what do we learn from this play?  First of all, using Harris as a pulling guard just doesn't work.  He doesn't get to the hole fast enough.  This happened to him a few times this game.  In a couple of ways, the offensive line gets blame here.  Still, a good, every down back should get positive yardage on this play.  CJ's got to start getting North/South.

I intend to put up more of these regarding the running game, time permitting.  I may also stick a few snapshots in the comments.  Note that this is the only "broken" running play that I have game film on, so the remaining images would come from traditional broadcast footage.