We're back for another Film Session.  Picking from plays in a winning effort like last Sunday is certainly more enjoyable than the week prior.  And though there are a number of plays to be excited about, this one had me the most intrigued.

Following a Ray Rice touchdown, the Titans get the ball back with 8:32 to go in the 2nd quarter.  What followed may be one of the more innovative formations that the Titans have shown in the last five years.  It's not wacky, or gimmicky, but it bucks the traditional trends in the NFL.

On 1st and 10 (after a defensive penalty), the Titans break the huddle with their "11" personnel.  Not surprisingly, the Ravens use their nickel package to defend the 3 WR set.  Here's where it gets interesting...

From top to bottom, the eligible receivers are as follows: Hawkins, Britt, Washington and Cook.

And, from the unconventional set, you can see the Ravens defense scrambling.  Ed Reed has man responsibilities for Cook has now realized that he's not at the traditional TE spot.  Similarly, the Ravens corner is just now identifying that Britt is in the nearside slot. 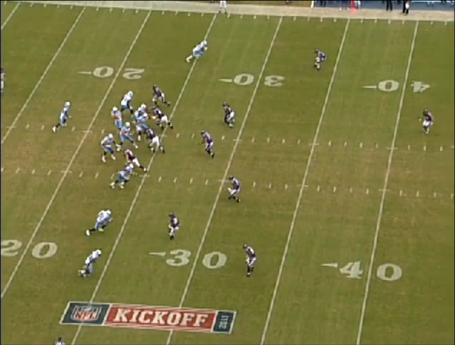 It doesn't show well here, but Hasselbeck gets the ball snapped quickly after he's identified that Ed Reed is out of position.  The frame above is a split second after the ball is snapped, and Reed has only now gotten in a position to defend Cook.  Oh, in case you didn't know, Ed Reed is 5'11".  Cook is 6'5" with a 41" vertical.  Read: mismatch 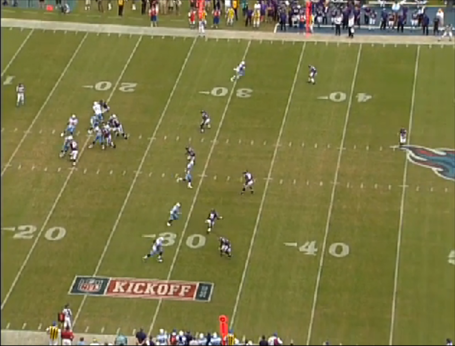 Hasselbeck has now completed his drop and begun his hitch forward.  Protection is excellent.  By this point, it's clear that the Ravens are in man coverage with zone help underneath and over the top.  It's a MOFC (middle of the field covered) look, which Hasselbeck has no doubt identified.  Titans are running verticals, and Kenny likely has a responsibility to get skinny if they are in MOFO coverage.  With the safety in the middle of the field, the read is to the outside.  All this said, Hasselbeck is looking Cook the whole way, and for good reason.

Hasselbeck steps into the pocket and delivers the ball.  It's clearly just Cook and Reed.  Ed Reed is an excellent defender, one of the best in the league, but he is totally outmatched physically by Cook.  Hasselbeck knows that he can lay the ball out there and the worst case scenario is an incompletion provided that the ball is thrown long and high enough. 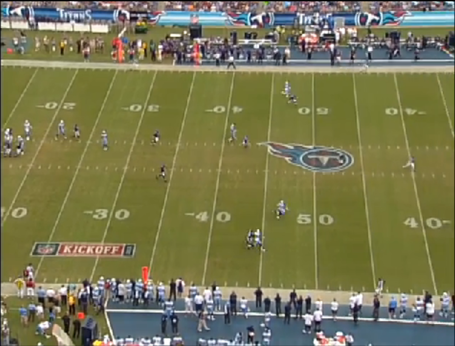 The ball is in the air and Cook now has a step on his defender. 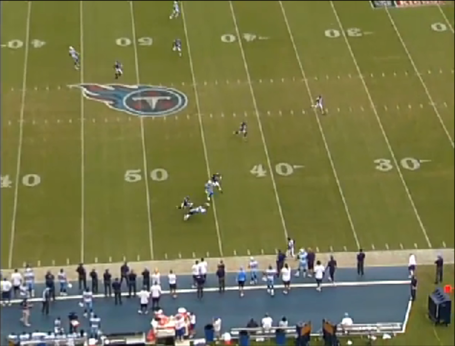 The Cook we've heard about from practice/training camp from the past 2 years shows himself by making an acrobatic grab falling backwards.  It's a beautiful throw too.  Far enough from the defender that there's no risk of turnover, yet in a spot where he knows his athletic teammate can make a play on the ball.

There are a number of high points from this game, but this one has to be one of the highest for me.  I didn't know what to expect out of Chris Palmer, and I was admittedly skeptical.  So far, the man has me pleasantly surprised.  He's showing unique looks in the passing game that are really highlighting our players at the skill positions.  He puts his players in different places schematically that allow them to maximize their talents.  Novel idea, huh?