Each week, I intend to take a closer look at some of the highlight plays from each game.  Plays will be detailed with images, which can be viewed through the jump.

The first play we'll look at to begin this series is the MJD touchdown run at the 6:55 mark in the first quarter.  Kudos to the Jags.  This play was run beautifully.  Offensive blocking indicates some kind of a zone stretch, and the defense buys it the entire way.  The fullback delivers the final blow, sealing the outside, and MJD does the rest. 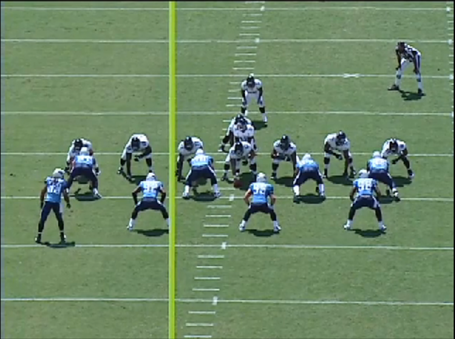 Jags line up in a power set.  Two balanced tight ends, one fullback, and a running back.  Titans match with 7 guys in the box, and Griffin creeping right on the edge.  Karl Klug is lined up at RDT.  Zach Clayton at LDT. 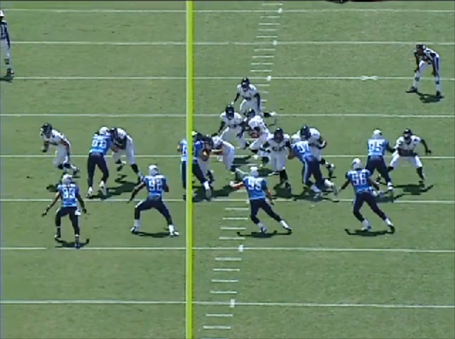 The ball is snapped and Zach Clayton immediately gets blown off the line by a double team.  When you see the replay, it is evident that he gets a bad jump.  Not only that, but his pad level horrible.  As a result, he gets no leverage.  The rest of the defense is flowing in the direction of the blockers, to the left side of the screen.  Notice the Jags LG is not blocking anyone yet, and the man to Hayes right is a TE running a route (ie. Hayes is not blocked either).  Ruud, Ayers, and Hayes are all effectively "unmanned" at the beginning of this play. 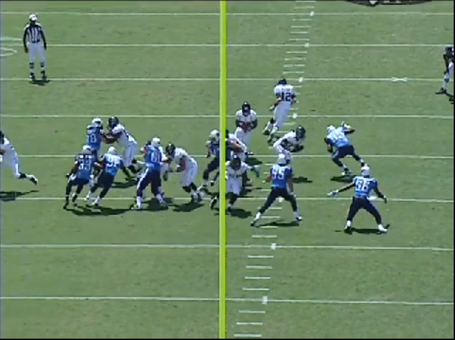 This is where things get ugly.  By flowing to the strong side (left side of screen) of this run, 5 of our 8 defenders have eliminated themselves from the backside of the play, including Karl Klug who has shot the gap so far that the Jags LT has him on the right side of the formation by the time that MJD gets the ball.

But, what about the others?  Hayes, initially left uncovered, has now hesitated enough that he effectively rules himself out of the play.  That's not a huge deal, as he's backside protection.

No, the real problems are Ruud and Ayers.  Neither defender shows any indication of decisiveness on this play; both bouncing left and right instead of attacking the hole. 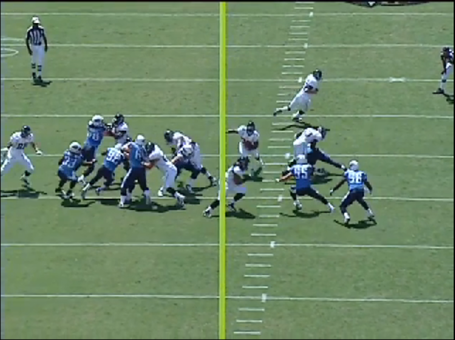 As you can now see, Ruud has completely run himself out of this play, andabandons anything that resembles gap responsibility.  Ayers is not doing himself any favors at this point by standing still, but Ruud has effectively rendered him useless...running right in front of him and leaving the entire middle of the field for MJD's taking.  *sigh* I miss Tully. 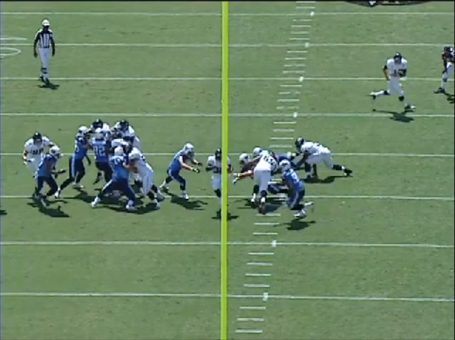 Jones-Drew is now full speed ahead, Ruud is behind the runner, and Ayers has no chance to make a play on the ball.  MJD reaches pay dirt untouched.

Ruud is certain to get an earful from the coaches this week.  While this is still likely a positive play for the Jags, it's probably just a moderate gain if Ruud keeps his A Gap responsibility.