Today really wasn't that eventful of a day at Titans training camp. They just worked in shoulder pads and shorts early on, and about halfway through the practice they took the shoulder pads off. One guy that continues to stand out on the field is Jared Cook. First off, he is a huge dude, and he catches pretty much anything that is thrown in his area. He reached up and snatched a ball out of the air from Matt Hasselbeck today that looked a lot like the ball he caught from Jake Locker on Saturday night.

Justin Gage made the catch of the day hauling in a pass in the back of the end zone. To me that just served as a reminder of how he always makes the circus catch but drops the one that hits him in the numbers.

I really like watching the new defensive staff work. The defense is going to be much improved from last season, and as an aside, Shaun Smith is huge and hilarious.

After the jump you can see the mini-helmet that I got signed by Coach Mike Munchak today (I was there as a fan, not as media if you are wondering). We were all really hoping that Jake Locker would sign. He didn't, but as gramsey said, anytime you get an autograph with "HOF" beside it, it is a pretty good day. 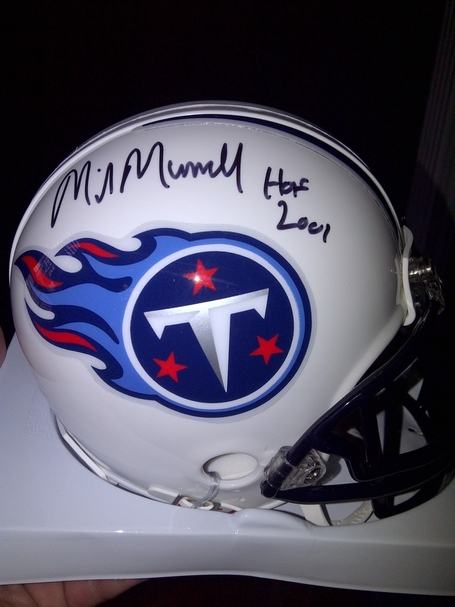