Kenny Britt Does Something Else Stupid, Sun Sets In The West

Share All sharing options for: Kenny Britt Does Something Else Stupid, Sun Sets In The West

Still in the thick of the PR disaster that has been his off-season, Kenny Britt has made another bone-headed move. Apparently he's gone on Facebook to announce he's 'retiring. According to journalist Brendan Prunty is reporting that Kenny left the following status update on his facebook page earlier:

Retiring from the NFL. F*** You Goddell.

Really? Really... apparently. The original post was deleted within about 20 minutes, and replaced by a recanting post. It's a bit of snooze, but yet another sign that Kenny just isn't getting it. I mean in the end it's just a dumb status update from a guy who is clearly pretty frustrated right now (of course, he's the cause of all of the problems, so go figure), but it's these kinds of dumb missteps that continue to pile-up. At this point we almost need a fancy chart we can update quickly to track Britt's 'incidents'. 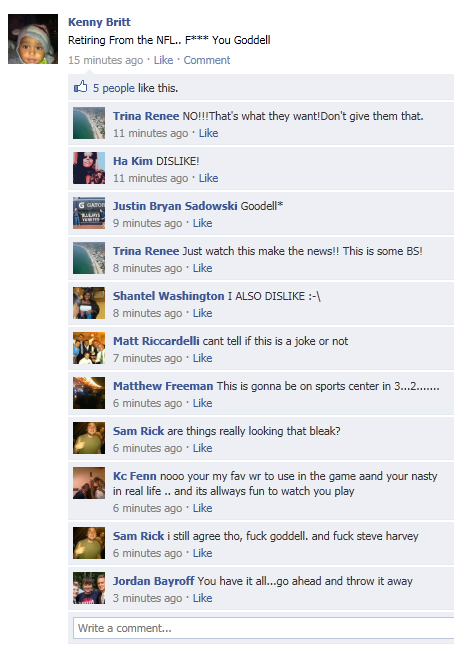