With the 46th pick of the 2011 Music City Miracles Mock Draft, the Denver Broncos (represented by trevor2013) select: 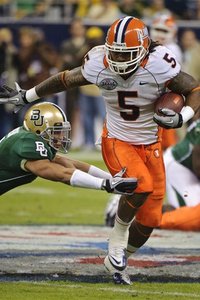 The Broncos rush O was awful last year. They ranked 26th in rushing O this past year. I don't think Maroney will be on the team next year, and even though they have Knowshon Moreno, they could really use another RB. Leshoure is arguably the 2nd best RB in the draft, so if he were to fall to this pick, I think it would be pretty tough for Denver not to take him. Also, John Fox likes to carry multiple backs, and Leshoure, Moreno, and possibly Buckhalter would be a great trio to take pressure off of Tim Tebow. I am just assuming Tebow will be the starter, even though Fox and Elway are saying that Orton is the guy right now.

Now on the clock: z24lax and the St Louis Rams