With the 45th pick of the 2011 Music City Miracles Mock Draft, the San Francisco 49ers (represented by ronburgundy7427) select: 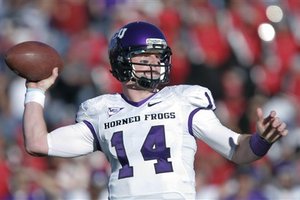 After shoring up the secondary in the first round, it's time to grab a young QB for Jim Harbaugh to tutor. Recent scuttlebutt has him meeting with Alex Smith frequently and expressing a desire to have him come back, but he is a free agent and will apparently test the waters before deciding whether to return or not. Even if he does return, better depth at QB is needed and someone with more upside than Smith.

Dalton may not have any "eye-popping" measurables or abilities like a Newton or Mallett, but the guy was a producer in college, saving his best for last as he had nearly 3,000 yards passing, 27 TD/6 INT and a 66% completion rate en route to leading the Horned Frogs to a Rose Bowl win. Oh, and he also ran 86 times for 435 yards.

Dalton strikes me as an "Aaron Rodgers lite" that could be a very effective QB in the right system, perhaps Jim Harbaugh's, and would benefit from sitting on the bench in SF for a year and being taught by Harbaugh while someone like Smith starts.

Also considered a pass-rushing OLB or a NT, but decided that the uncertainty/possible desperation at QB had to be addressed here

Now on the clock: trevor2013 and the Denver Broncos