With the 43rd pick of the 2011 Music City Miracles Mock Draft, the Minnesota Vikings (represented by AGRIFF) select: 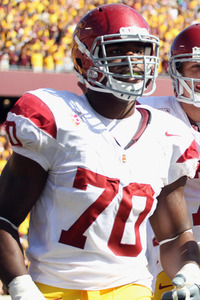 This guy is high or at the top of the Offensive tackles on many boards and I'm susprised he is still here.  He was unable to workout at the combine.  However, he weighed in a 6'5" 307 lbs which is much more heavey than he was at USC.  He is a physical freak with a 36 3/8 inch arm span, and played extremely well at USC despite weighing only 290 which is undersized for a OT.  He has all the physical attributes to be a great line man, but he is switchng from left to right tackle which some people say could hold him back a little early.

Now on the clock: Danielreese05 and the Detroit Lions