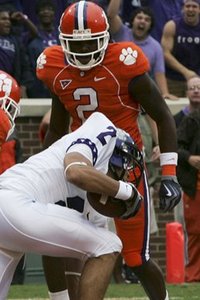 McDaniel is a great tackling Strong Safety and has draw comparisons to Troy Polomalu of the Pittsburgh Steelers. This is due in large part to the fact that he played as a LB; his Freshman year. He also has great ball skills as he has picked off 8 passes, 102 tackles, 3.0 tackles-for-loss, and had 2.0 sacks in 2009. In 2010 his stock fell victim to the poor play of the Clemson secondary. As a result scout have been questioning his deep speed and his combine seems to have backed up his slow deep speed. However, he is, in my opinion, the best SS in this year's draft. With no edge rusher or running back available high enough on my board DeAndre was my choice here.