With the 57th pick of the 2011 Music City Miracles Mock Draft, the Seattle Seahawks (represented by asian phil) select: 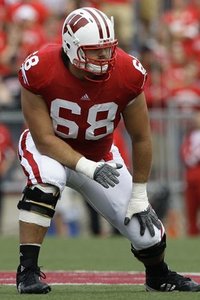 I'm kind of surprised Carimi is still in this draft. Some scouts have him as a 1st round pick and even one of the top tackles available. I guess when in doubt, selecting the BPA isn't a bad strategy. Although the Seahawks drafted Russell Okung at the tackle position in the 1st round a couple of years ago, it doesn't hurt to have too many good offensive linemen. Carimi is known for his run blocking, which should benefit the Seahawks running game that ranked 31st in the league last year. In addition, his pass blocking skills are good enough to help protect the Seahawks incoming young QB, or their everlasting aging veteran.