With the 56th pick of the 2011 Music City Miracles Mock Draft, the New Orleans Saints (represented by nathangouge) select: 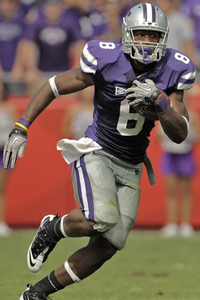 The Saints have a good set of running backs but that playmaking guy is lacking. Pierre Thomas is getting older and Reggie Bush just isn't putting up the numbers mostly due to injury. Thomas from KSU has a huge skill set and has great elusiveness. He is built a lot like Ladainian Tomlinson in style but is built like a wide receiver. He reminds a lot of Calvin Johnson or Michael Irvin coming out of the back field and I couldn't help but feel confused when I watched the highlights. He had over 500 yards and 6 touchdowns in the first three games this year. He finished the year with 1585 yards and 19 touchdowns.  He is the every down back that the Saints are looking for.

Now on the clock: asian phil and the Seattle Seahawks