With the 55th pick of the 2011 Music City Miracles Mock Draft, the Kansas City Chiefs (represented by Knox The Fox) select: 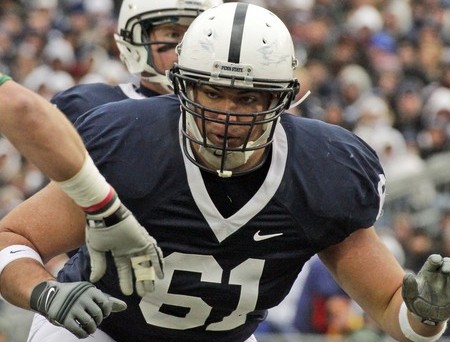 From Knox The Fox:

Ideally, there would be a wide receiver here for the Chiefs that didn't feel like a reach, but I'm not sold personally on anyone past Randall Cobb enough to pull the trigger.  That being the case, this is an otherwise ideal situation for the Chiefs, with a possible first-round talent falling to them in the second at a position of need.

The Chiefs can't be certain that they'll be able to resign current center Casey Wiegmann, and, even if they do, he'll be 38 this year.  It only makes sense, then, for them to go with one of the safest picks in the draft.  With Wisniewski, the Chiefs get a first-team All American center who is intelligent, hard working, durable and doesn't have any glaring weaknesses in run blocking or pass coverage.  He's a guy who can be an anchor for the Chiefs in the future, and he can step in immediately if Wiegmann isn't resigned (and if the Chiefs draft his replacement in the second round, I imagine that he wouldn't be).

Now on the clock: nathangouge and the New Orleans Saints