With the 54th pick of the 2011 Music City Miracles Mock Draft, the Philadelphia Eagles (represented by King Titan) select: 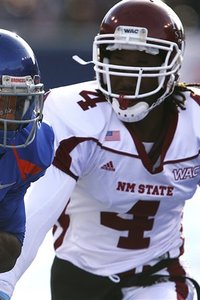 Arguably the Eagles greatest need.  A cover cornerback across from Asante Samuel.  Everybody remembers Ellis Hobbs being destroyed time and time again by Kenny Britt, but it just wasn't Kenny abusing the second corner, it was most receivers.  The Eagles select someone with a bit of size (6'1", 200 lbs) and who ran a 4.35 at his pro day.  Adding to it, he is a playmaker, with 13 passes broken up and 3 interceptions his junior year and 2 interceptions with 10 breakups during his senior season.

Now on the clock: Knox The Fox and the Kansas City Chiefs