With the 51st pick of the 2011 Music City Miracles Mock Draft, the Tampa Bay Buccaneers (represented by WinnipegTitanFan13) select: 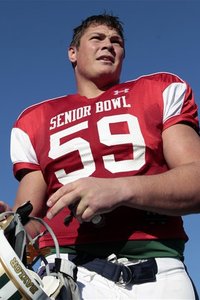 Watkins is currently the second rated guard on Mocking the Draft's board and a player I think the Bucs will be thrilled to grab at this spot.  His stock is on the rise and I've even seen some mocks that have him as a late first rounder.  LeGarrette Blount did some excellent work last year but with not much help from the offensive line.  With Freeman and Blount the Bucs have a talented, young backfield so protecting those two should be a major priority.  Watkins' versatility here is an added bonus.  He can jump in and start at the guard spot (where I think he is most suited for), but also could be groomed as a tackle.

Now on the clock: MikeGriffFan27 and the New York Giants