With the 48th pick of the 2011 Music City Miracles Mock Draft, the Oakland Raiders (represented by SoCalTitan) select: 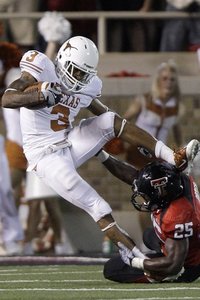 With the departure of one of the best CB in the league the Raiders will need to plug the gapping hole in their secondary. Chris Johnson (the other CJ) and Stanford Routt currently make up their starting CBs. Routt had a great year filling in for Nnamdi and should continue to be a starting CB but Chris Johnson is just an average CB at best so Curtis Brown would be a definite upgrade here. Brown has been a recent riser on a lot of people's boards and had an excellent combine. Athletically he very good in man to man coverage with so so hands. He may need a year before he can be a starter but can definitly make an impact on special teams and in nickel/dime packages.

Now on the clock: CrazyTitan and the Jacksonville Jaguars