With the 47th pick of the 2011 Music City Miracles Mock Draft, the St Louis Rams (represented by z24lax) select: 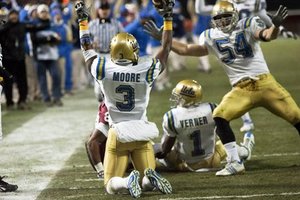 After releasing safety AJ Otogwe in the offseason the rams added safety to their list of needs in the draft.

Moore is regarded by most as the top safety prospect in this draft and the honors he garnered at UCLA explain why.  He leaves after three years with 180 tackles and 14 interceptions, including an NCAA leading 10 in 2009.  Comparatively speaking Peterson and amukamara combined for 12 interceptions in their careers combined, not saying he's on their level, but he's pretty good.  He was a 2nd team AP All American as a sophomore in 2009, and a 3rd teamer in 2010 before leaving early for the draft.

I think the rams would've liked one of the cb's like Harris or Williams to fall here, as well as a guy like Titus young, but I think they'll end up pretty happy adding Rahim to their defensive backfield.

Now on the clock: SoCalTitan and the Oakland Raiders' first pick